The Maakri 23 building was built in 1910 for the Birk family. It was designed by Aleksander Jaron and serves as one of the best examples of Art Nouveau architecture in Tallinn, also being an object of heritage protection. The same family had established their business here in 1820, making it the oldest company of its kind in Tallinn. 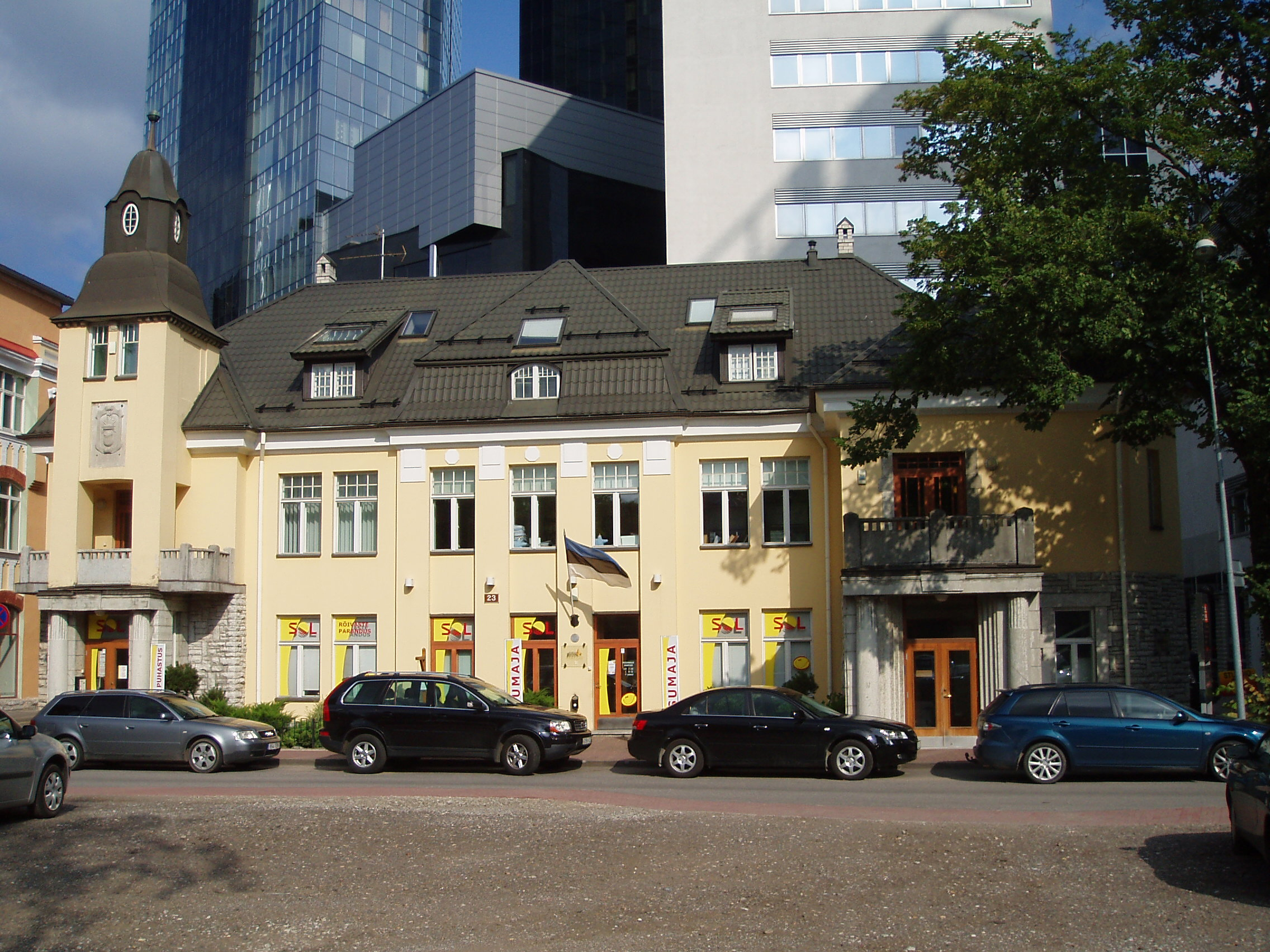 At present, OÜ Sol Eesti is providing dry cleaning and laundry services in the building, and there is also the Hairhouse hairdressing salon. The rest of the facilities are occupied by offices – this is the location of the Estonian Athletic Association, the Sven Sillar Law Office, the real estate developer Blauhaus OÜ and Ingrad Kinnisvara OÜ.

The area of Maakri Street is the birth place of Tallinn’s industry.

This street ran parallel to Härjapea River, the river with the largest volume of water in mediaeval Tallinn.

Back in the middle ages, there already were watermills and tanneries here.

Craftsmen were the main inhabitants, since their activities polluted too much (tanning, boiling tallow, processing flax) or took up too much space (milling, bleaching textile) to be located within the town walls. Arable lands begun right behind the houses.

As the river, which had powered mills and industries since the 13th century, was finally more than polluted and about to grow over (the spillway gutters of toilets ran into the river, too), it was covered with panels in 1914 and permanently directed into a waste water drain in 1937.

Härjapea River is still flowing under ground to this day – it is evident from the floods that occur on Maakri Street during snowmelt or heavy rains. The watermills situated on Härjapea River later went on to grow into quite a few bigger industries.

1877, the Grünwald (later called the Union, turned in Soviet times into a footwear factory called Kommunaar and a factory for fancy leather goods called Linda) leather factory was established.

A paper mill was situated at the current site of Stockmann department store.

The Birk family lived in the area as early as in 1625. They founded their steam dyeing and dry cleaning industry in 1820, being the oldest one in Estonia specialised in these activities. In 1910, the lovely Art Nouveau building at Maakri Street 23 was completed.

The building was occupied by dry cleaning, dye-works and textile dressing workshops. The Birk family inhabited the second floor. 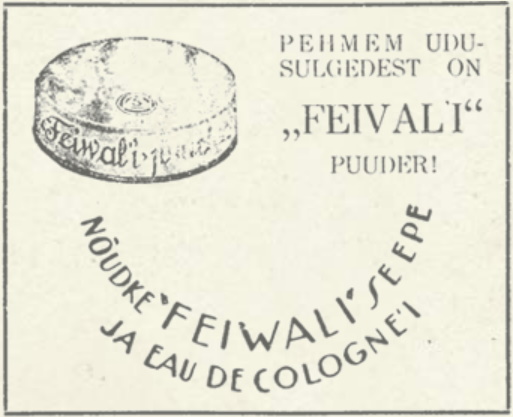 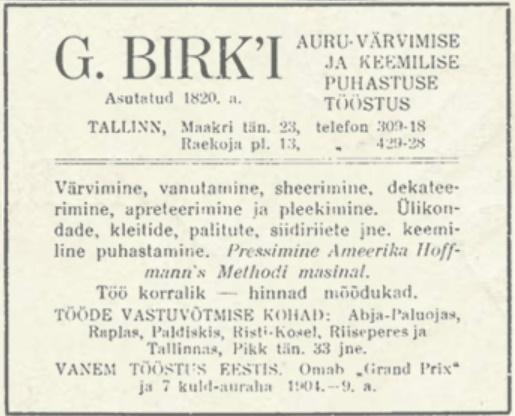 As an advertising of the time shows, the following services were provided: “dyeing, preshrinking, charing, decatising, dressing and bleaching, dry cleaning of suits, dresses, coats, silk clothing and so on, garment pressing on the Hoffmans Method machine from America”.

The ad does not fail to note that the Birk industry has won “a Grand Prix and 7 golden honorary medals”.

A document detailing the property dating back to 1937 has been preserved, revealing that the house was surrounded by a gray fence of 2 metres. There were wooden gates to the fence, two sheds in the yard, a cellar, fruit trees and bushes, and 12 chickens.

A letter by Martha Dethloff
At the time, the house was owned by Martha Dethloff, who leased a portion of the rooms out, since there were three flats in the building. A letter by Mrs Dethloff to the Tallinn City Government has been archived. The letter is a response to an increase in taxes: “The Maakri 23 house has no possible way of obtaining decent renters, as the river and the leather factory emit such a foul stench, and that is why there can be no mention of a tax raise of any sort”.

It would seem that when Härjapea River was directed into a waste water drain in 1937, that particular problem was solved …

During Soviet times, a production business of the name Kiir was active in the building; dry cleaning and dyeing services were provided, and there was also a self-service laundry, opened until 1992.

In 1994 the building was bought at a public auction by a German enterprise called a+4 Marketing Systeme GmbH.

OÜ Maakri Keemiline Puhastus (Maakri Dry Cleaning) was established. The enterprise owns the building even today. AS Harju Ehitus restored the building thoroughly and 2 June 1996, the first Sauberland dry cleaning outlet in Estonia opened its doors to the public. The chain later opened outlets in Tartu, Pärnu and Narva, and there were reception desks in Viljandi, Jõhvi, Rakvere, Kohtla-Järve and Sillamäe.

2 June1996, when the first Sauberland dry cleaning outlet was opened at Maakri Street 23.
The house is surrounded by a Japanese garden, complemented by two sculptures: an eagle as the symbol of Saaremaa, the biggest island of Estonia, and a hedgehog, the advisor of Kalevipoeg, the greatest hero of Estonian folklore, as the symbol of Estonia.

In 2008, the Sauberland dry cleaning chain was sold to OÜ Sol Eesti.

There are several people employed in the building who have had a connection to the house for as long as over 40 years, who love the building and their work. This is most rare; it gives the building a soul and is something to be grateful for.

Professional stain removers started work around the year 1800, when turpentine was used to clean cloth. However, turpentine was too expensive to fill a whole basin with and clean the dirty garments in it. In the early 19th century France, whale oil lamps were replaced by turpentine oil lamps, making turpentine relatively cheap and allowing it to be used for cleaning clothes. A French dye-works owner named Jolly Bellin became aware of the fact and in 1825, he opened a dry cleaning workshop in Saint-Denis, near Paris. He soaked the clothes in turpentine oil and removed the stains with a brush. Soon, people started talking about “the French wash”. 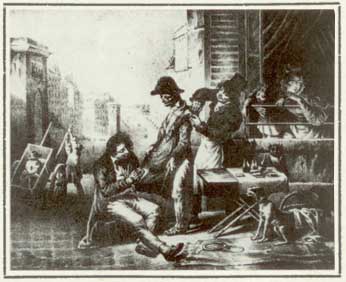 That is how the first stain removers worked in the 1820s.

One of the legends about how dry cleaning was discovered goes like this: Bellini’s apprentice knocked a turpentine oil lamp over, so what was inside was spilled on a uniform jacket on the table. After the turpentine had dried, the jacket was clean in the places turpentine had been spilled on. This had led to the idea to soak clothes entirely in turpentine oil.

In 1850s, turpentine oil was extensively used for cleaning in England as well.

In 1842, benzene manufactured from coal tar became a wide-spread solvent. It was cheaper, evaporated faster and had better cleaning qualities. The name of the service changed as the solvent became more commonly used – and now we talk about dry cleaning.

The people employed in the industry soon noticed that benzene posed a health hazard, and that is why petrol was chosen for cleaning in the 1860s. At the same time, a dry cleaning machine was being constructed and improved, with the descendants of Jolly Bellin in Paris at the forefront. 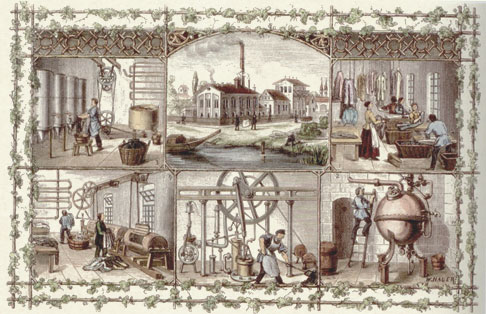 However, a series of explosions kept taking place in dry cleaning workshops. When the matter was investigated, it was found that the explosions were a result of electrical charges, a by-product of cleaning. To be precise, woollen garments have a tendency to create electrical charges when rubbing against other materials. A special product to the added to petro was developed, so as to avoid fires.

The industry’s attempts to discover a non-flammable cleaning agent led them to carbon tetrachloride, trichloroethylene and perchloroethylene. Hence, an era of non-combustible solvents began in 1923. The necessary dry cleaning machines of a closed construction were built and constantly improved. Since 1952, the shape of the machine has remained unchanged, and nothing revolutionary has happened to its main functions. The only thing updated is the machine’s conformity to environmental requirements.

In 1985, the search for an alternative to solvents stumbled upon hydrocarbon.

In the 1990s, an American engineer called Maffei patented a dry cleaning machine, which uses carbon dioxide to clean, but the world is still waiting for a breakthrough. CO2 is a colourless and odourless gas found in air, which means that using it to clean would ecologically be a very sound idea.

So it stands, that today, the solvents mainly used in the dry cleaning industry are perchloroethylene and hydrocarbon, and the markings P and F can be found on the maintenance labels accordingly.

Dry cleaning is done in closed machines and according to strict laws on environmental as well as occupational health and safety. 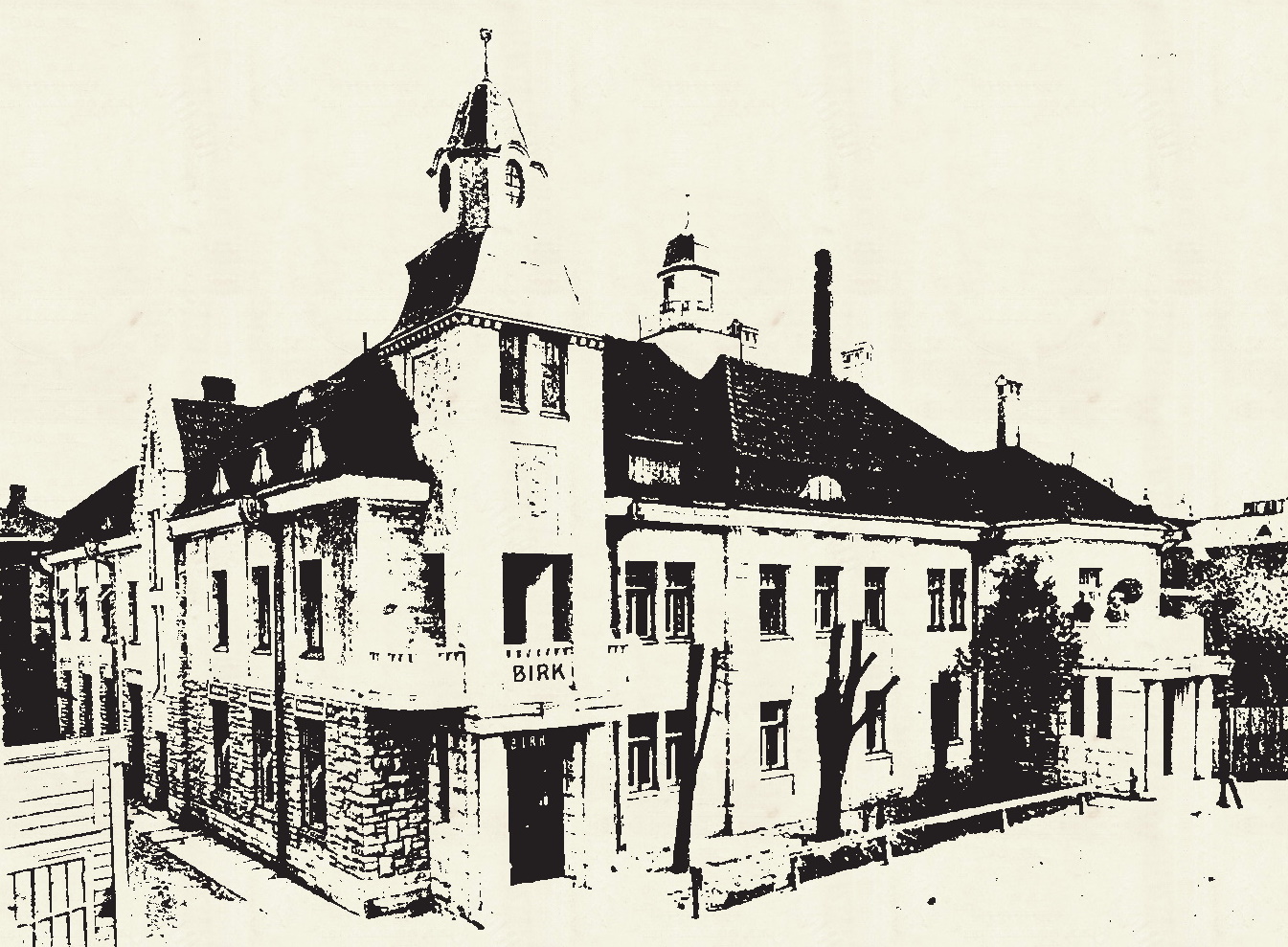 You can find out more about which cookies we are using or switch them off in settings.

This website uses cookies so that we can provide you with the best user experience possible. Cookie information is stored in your browser and performs functions such as recognising you when you return to our website and helping our team to understand which sections of the website you find most interesting and useful.

Strictly Necessary Cookie should be enabled at all times so that we can save your preferences for cookie settings.

If you disable this cookie, we will not be able to save your preferences. This means that every time you visit this website you will need to enable or disable cookies again.

This site is registered on wpml.org as a development site.